Lordi Take a Stab at Eurovision Song Contest (Or Is It Gwar?) 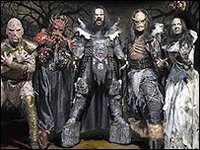 The Finnish people have chosen the highly Overt Lordi to be their representative in the Eurovision Song Contest. I wrote about Lordi a while back, but let's take a closer look at their song and their style:

"The five-piece will perform 'Hard Rock Hallelujah' clad in gruesome costumes and monstrous masks. They refuse to appear in public out of costume, while their grotesque make-up takes three hours to apply. The band are so protective of their rock alter-egos, their real names remain a secret.

They are known as Amen the unstoppable mummy, Enary the manipulative valkyrie, Kalma the biker-zombie and Kita the alien manbeast. Kita has the "combined strengths of all the beasts known to man", while he and the others are led by Lordi (The Lord). With lyrics such as 'wings on my back, I got horns on my head, my fangs are sharp and my eyes are red, not quite an angel or the one that fell, now choose to join us or go straight to hell,' Finland's choice has prompted some marginal controversy.'"

I wonder how the folks from Gwar feel about all this. Wouldn't it be amazing if this actually were Gwar pretending to be Finnish?

(Thanks to Cool Noise for sending me the article.)
Posted by Advanced Genius Theory at 10:21 AM

Email ThisBlogThis!Share to TwitterShare to FacebookShare to Pinterest
Labels: Overt

Finally a country that understands, and laughs with, what the Eurovision Song contest has become. By sending Lordi to the contest they show Europe that they think the entire contest is a joke.

Anyway, for those who want to watch their performce on the finnish pre-selection contest, here it is: Lordi Live