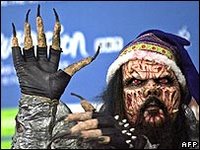 Bob Dylan may get three streets, but Lordi gets a whole square. Let's take a look:

"The Finnish city of Rovaniemi says it will name a square after monster rock band Lordi, its surprise Eurovision Song Contest winners.... The new square bearing Lordi's name will be part of the redevelopment of Rovaniemi's city centre. The town - the regional capital of Lapland - lies on the Arctic Circle and describes itself as the home of the real Santa Claus. In a statement issued to Finnish media the official Rovaniemi Santa Claus said: 'Lordi's victory shows us that with hard work and belief in your own abilities even the greatest dreams come true.'"

And they were never heard from again. Just kidding. I'm sure they'll have long, successful careers and will play gold and open Tex-Mex restaurants in Arizona.
Posted by Advanced Genius Theory at 10:27 AM