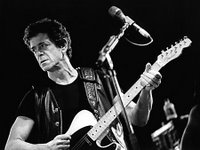 This just in: "Tomorrow (Tuesday, May 23), New York legend Lou Reed will headline a free concert at the grand opening of the building at 7 World Trade Center. The show, which begins at noon, will celebrate the official opening of the first new building at the World Trade Center site in its new outdoor park." There will be a 60-person choir there, too, so let's hope they collaborate.

This event is interesting: He's a great choice because he has written a lot about New York, but then again he's a terrible choice because of the New York he has written about. He's not exactly cheerful, either. But I have to say that it's nice to see that the city is still committed to Advancement and isn't going to let the Overt (or the terrorists) win.

Anyway, the sad thing is that I will be at work and can't go anyway. Maybe one of you can film it for me, and I'll put it up on my YouTube account.
Posted by Advanced Genius Theory at 2:24 PM

Email ThisBlogThis!Share to TwitterShare to FacebookShare to Pinterest
Labels: lou reed, Overt